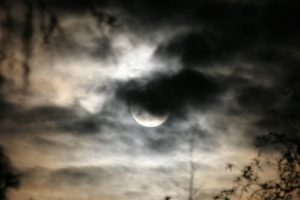 It was nearly midnight and the full moon shown through the storm clouds, more as a backlight that stretched from horizon to horizon, than a light in any one place in the sky. It had just started to rain after an evening of promises and far off thunder. It was a much-needed rain for this part of the hills. The summer had stretched into fall and neither season had brought any relief, until now.

As the lightning strikes came closer and closer together, the figure standing on the hilltop became more obvious. He was not a large man but rather well put together. I could see that although he was obviously in good shape, his body sagged on his frame, sort of like he had toiled long and hard with a great weight upon his shoulders and had just recently laid this weight to rest upon the hillside.

I could see his long, wet hair barely moved by the wind of the storm. He stood very still and looked off into the distance as if he was waiting for someone. As I neared him, I could tell by the look on his face, that there would be no one else.

I watched as water ran down his face and I was unable to tell if it was rain or tears. I hesitated approaching any closer, this soul did not welcome the stranger. Instead, I half-kneeled and half sat on the soaked ground, knowing that the wetness of the ground would not chill me any more than the sight that lay before me.

My heart reached across the distance between he and I but could find no purchase upon him. I was left unable to walk away and unable to go to his side. So, I stayed in my place, hoping that at some point I would be able to move, even if it was just to move away. I knew that time would not come soon.

As I watched, he seemed to grow stronger and straighter by the minute. He seemed to have found a strength that he had forgotten. The look on his face changed from tired resignation to one of wisdom, power, and courage. The water still ran down his face but now I was sure that if it were tears, they were tears of determination.

The wind blew and the sky was lit over and over from the storm but his soul stood still and firm. I saw a slight smile curl the corners of his eyes and he laid his head back and out of the night, I heard a howl that came from no one direction. It pierced the darkness around me and grabbed at my heart, which skipped a beat and started back in at a much faster and much stronger tempo.

I could not understand if there were words in the howl but I needed none to know that the howl was not one of victory but of renewed hope, renewed vigor for the battle. He had reached down inside of himself and found the one thing they could not touch, the one thing that they could not steal. He found his soul and he found it as strong and as vibrant as it had ever been. He now knew that even after his body was beaten and laid to rest on one of these same hillsides, that his soul would live forever and that it could never be beaten.